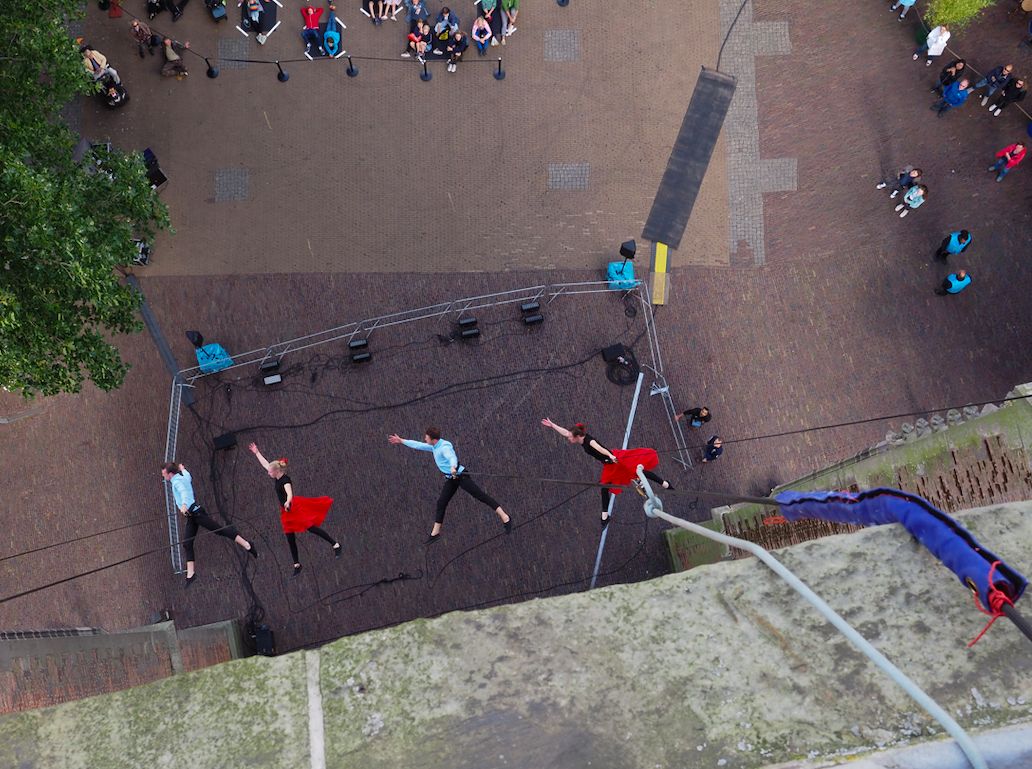 Different from usual, but just as beautiful: Spoffin 2021 took over Amersfoort this weekend! With a number of adjustments and measures, at smaller, intimate locations and with a special program full of artists from the Netherlands and abroad, the eleventh edition of the festival for street and location was set up. Spoffin 2021 was visited by about 10,000 visitors over the entire weekend.

After a gap-year, last weekend it was finally time for Spoffin again and anyone in the center of Amersfoort could not ignore it: the festival was in full swing! Artistic director Alfred Konijnenbelt looks back on a successful but also special eleventh edition. ,,I am satisfied beyond expectations with how it all turned out, with all the complicated situations, adjustments, detours we had to figure out… It was a challenge to set Spoffin up this year, but I am very happy with how it all went. Both artistically, organizationally and in terms of visitor numbers.”

Visitors
The changeable weather didn't stop people from coming to Spoffin this weekend. Spoffin 2021 attracted about 10,000 visitors over the entire weekend, about a third of a 'normal' edition of the festival. ,,We expected about ten percent of a normal edition, so about 3,500 visitors. With 10,000 that worked out positively!”
Sitting on large carpet tiles, visitors enjoyed about eighty performances by artists from abroad this Spoffin weekend. Every year Spoffin selects a focus country from which the most special makers in the field of street and location theater are invited. This year, special attention was paid to the Netherlands.
Konijnenbelt lists many favorites within the Spoffin 2021 program. From himself, but also from the public. ,,Arnhemse Girls, Clou Dance Company, Holektiv, EEDT… I've seen so many good performances. Marte Boneschansker is a real gem. Lejo is just always nice. Audience favorites included Mobil&Casier, Actic, Holektiv and Gracie&Christian. And Sky Motion has given many visitors a great experience with their vertical dance against the tower.”

Being able to realize Spoffin 2021 required creativity and adaptability of the organization, but in the end a way was chosen to continue Spoffin 2021 in the most accessible way possible. Something Konijnenbelt is really happy about. ,,It kept looking and we had to reinvent ourselves again and again, but I think we made good choices from the start. The idea of ​​testing, putting up fences and denying entry was really a ghost to me. I would have thought that was terrible. The essence of this festival is that it is open. Accessible and inviting. You would have broken it all that way. That's why I'm very happy with the path we've chosen."

De Lieve Vrouw and FLUOR
This year Spoffin sought cooperation with two other large parties from the city. The performance BLOOS de men was presented together with theater De Lieve Vrouw, in which participants listened to stories about being a man in large bathtubs. Poppodium FLUOR presented a musical program with sold-out performances by singer-songwriters Lucky Fonz III, broeder Dieleman and Meindert Talma. The collaborations were well received, both by the public and by the organisation. "We want to do this more often in the coming years," says business leader Mike Iking. "With De Lieve Vrouw and FLUOR, but perhaps also with other parties from the city!"
Spoffin 2022
Although everything could be managed in the right direction within the measures and Spoffin 2021 delivered a successful edition, Rabbit Belt hopes to be able to really go full throttle with Spoffin next year. “The first plans for next year have been in the works for a long time and the focus country has already been determined: in 2022 there will be special attention for Germany. How the festival can be organized by then remains exciting, of course. But with the success of this edition, we are already looking forward to next year.”
In 2022, Spoffin will take place on August 26, 27 and 28.